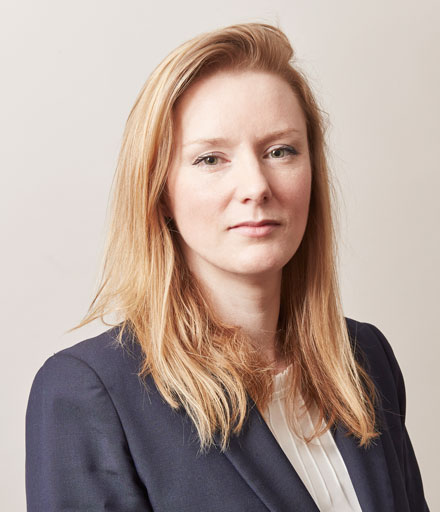 2005 - Clerk at the Leasehold Valuation Tribunal

Caroline is a family law specialist.  She has practiced family law, and family-related civil law, since 2008.  She represents local authorities, parents and children’s guardians in both public and private children law applications.

Caroline is an experienced practitioner who has been instructed in complex care proceedings before the High Court and at circuit judge level, in matters which have involved allegations of fabricated illness, historic sexual abuse, child sexual exploitation, neglect, non-accidental injury and significant drug and alcohol abuse; and involved matters of jurisdiction.  She represents parents, children (as instructed by CAFCASS), interveners and local authorities, and is experienced in working with vulnerable adults and those affected by disability. She has been judicially commended for the quality of her written submissions and case preparation, and is well liked by clients for her robust but sensitive approach.  Instructing solicitors appreciate her consistency in communication and willingness to tackle difficult issues on behalf of her clients.

Representing the local authority in care proceedings involving historic allegations of sexual abuse by the father against the elder half-sister of the Child.  The sister was a child at the time of the abuse.  Father sought direct contact with the Child.  Findings were sought in respect of the allegations of historic abuse as they were relevant to the Child’s contact with the father, in particular the future development of contact in circumstances where the Child’s mother struggled significantly with her mental health.  The sister was made a party to the proceedings and required an intermediary.  I conducted the case management proceedings, as well as providing advice as to the merits of seeking findings, drafting the findings sought and conducted the case at final hearing where findings were made.

Representation of the Father in care proceedings centring on allegations of domestic abuse between parents of twin babies.  Both parents were deaf with learning difficulties and required interpreters and intermediaries for the court proceedings, which then resulted in partial relay translation whilst the parents gave evidence.

Representation of a Polish Roma mother in care proceedings involving her three very young children. The local authority alleged significant neglect and domestic violence.  The parents suffered from learning difficulties and alleged that they were not appropriately assessed according to their level of need, both intellectually and culturally.  Ongoing police involvement during the course of the trial, delaying the proceedings.  Both parents had intermediaries and translators.  I was instructed for IRH, the ground rules hearing, and for trial.

Led junior for father in lengthy final composite hearing before Holman J.  There were complex medical issues as to the causation of serious injuries to genital area of child, and difficult issues as to placement of 6 children.  This was the second set of proceedings in similar circumstances for the parents, whose elder 4 children were subject to care orders from 2012 to 2015, and whose 6 children came to the attention of the local authority when the eldest daughter was presented at hospital with significant vaginal injuries.  She later identified her eldest brother as the perpetrator, but this was denied by him.  The court had to determine whether the eldest child was the perpetrator or whether her account could be trusted.  Other family members, including the father, were implicated.  Significant failings of police and social work procedure and practice featured.  A lack of supervision by the parents was alleged.  Four Children’s Guardians were involved.

A Local Authority v A

Instructed by a local authority in an application for a Female Genital Mutilation Protection Order under the Female Genital Mutilation Act 2003 to prevent a child from being subjected to an act which could be described as FGM, and for that child to be prevented from being removed from the jurisdiction to prevent the same.  The parents were originally from a country where the practice was prevalent, though it had recently been made illegal.  The mother had come to the attention of the local authority when she was pregnant as she herself had been “circumcised”.  The local authority was concerned that, despite the parents being, in all other ways, caring and competent parents, their beliefs and family structure meant that the child was at risk of FGM, particularly if she left to visit the parents’ homeland.

Representation of the father in an application made by the paternal grandmother for residence in an intractable contact dispute between the mother against the father and grandmother. The mother appealed the decision of the County Court to transfer residence to the paternal grandmother. The father had previously been subject to domestic violence allegations and the appeal followed a 6-day trial which involved legal argument on the issues of special measures for vulnerable witnesses, and issue estoppel.

Representation of the applicant mother.  Successfully applied for permission to appeal the order of a Recorder in relation to the making of a sole residence order to the father, transferring residence from the mother. Issues of control alleged by the mother, both in relation to her finances and her status as an immigrant. Appeal adjourned by the Court of Appeal on the day of the hearing for mediation upon the parties agreeing to a change in the Recorder’s order. Case subsequently settled.

Caroline is available to provide training via chambers.

Caroline has been a keen supporter of the wellbeing initiative within Chambers.  She was responsible for organising a wellbeing and back-to-work seminar run by Wendy Showell Nicholas, psychotherapist, to address the concerns of working or returning to work during the pandemic whilst also managing other caring commitments.

Caroline has been a mentor via BPP.