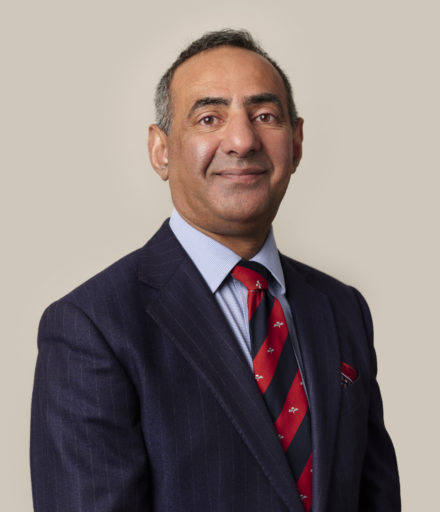 Nadim sits as an Assistant Coroner at the Coroners Court at South Central Wales and continues to provide representation at inquests and pre inquest reviews, particularly in relation to inquests involving members of HM Armed forces.

As a Lieutenant Colonel in the Army Reserve, Nadim is also a prosecuting officer for the Service Prosecuting Authority (SPA), where he will prosecute members of any of the British Armed Forces (British Army, Royal Air Force or Royal Navy), anywhere in the world and has been doing so continuously for the last 20 years with prosecutions being conducted in N. Ireland, Germany, Cyprus and as far afield as Brunei. He also enjoys a healthy defence Court Martial practice.

Nadim also undertakes a range of Police work on behalf of the Chief Constable, specialising in firearms/shotgun appeals under the Firearms Act 1968, Cash Detention Orders and Forfeiture Proceedings under POCA 2002 and the delivery of seminars in respect of SHPO’s under the SOA 2003 as amended.

Craven Council v Billy Bob’s Ice-Cream Parlour – HSE investigation which was taken over and prosecuted by Craven Council involving offences contrary to Section 3 and 4 of the HSWA 1974 and RIDDOR Regulations involving 5 Defendants (2 companies and 3 individuals) in respect of the provision of an unsupervised children’s play barn on the site of their ice-cream factory where a large number of serious injuries followed due to the inadequacy of the play equipment provided.

R v Smith, Lloyd & Lewis –   Health & Safety – Gross Negligent Manslaughter prosecution with Negligent Performing a Duty under military law charged in the alternative.  The core allegation centred around 3 Defendants who were part of a 5-man team in the Bio Washdown Facility in Camp Bastion, Afghanistan where they had adopted an unsafe system of work causing the death of one of their number when a bucket slid off a raised set of forks on an earth moving machine instantly killing their colleague.  Issues involving Combat Immunity were raised and responded to but were never fully argued given that guilty pleas were entered.

R v Price, Bell & Pankhurst – Health & Safety Gross Negligent Manslaughter case with Negligent Performing a Duty under military law.  The case concerned the setting up of 2 adjacent live firing ranges by a Junior Officer but where the participants of the first range were firing in the direction of the adjacent range causing a soldier to be killed on the adjacent range.

An Introduction to Inquests – This seminar is intended to be an introductory guide for those who currently have very little inquest experience but would like to grow their practice.

We are pleased to announce that Nadim Bashir has been appointed as an Assistant Coroner.