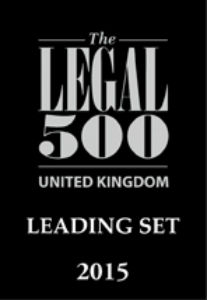 The 2015 edition of the Legal 500 was released yesterday and named Park Square Barristers as a leading set in the North East.

The index described chambers as ‘an impressive set with a great deal of experience’  and saw 29 members of chambers listed amongst the ‘Leading Silks’ and ‘Leading Juniors’ on the North Eastern Circuit, in 6 different fields of law.

The Personal Injury and Clinical Negligence Team were praised for their ‘technical ability, approachability and availability’, which is ‘second to none’.  The Civil Fraud Team are regarded as a ‘first choice‘ for many insurers. A particular strong suit is insurance fraud defence work, including staged road traffic collisions and phantom occupant cases.

The 27 strong Commercial and Chancery Team were described as ‘well placed to advise on a broad spectrum of issues’ due to its ‘ability to leverage its strength in other related disciplines’.

The Criminal Team were also highly lauded in the index, with all 3 resident criminal QC’s receiving ‘leading silk’ status along with 9 recommended juniors. This rapidly growing team now contains five silks and has 23 Grade 4 CPS Prosecutors who ‘deal with the full gamut of offences, ranging from fraud and terrorism to murder and drug importation’.

The 38 strong Family Team effectively led by Alison Hunt received high praise from the index, with 6 of its members receiving mention amongst the north-east’s leading juniors. In care proceedings ‘members act for parents, guardians and local authorities in a wide range of matters, including the involvement of emotional harm, serious non-accidental injuries and sexual abuse’. Areas of expertise also include contested adoptions, financial remedies and relocation disputes.

The Regulatory and Disciplinary Team were also recognised Park Square Barrister’s strength in prosecuting ad defending a range of health and safety issues, inquests, trading standards and sports-related regulatory matters and identified 3 of its members as leading juniors.

The Joint Heads of Chambers both received ‘leading silk’ status in their respective fields. Andrew Lewis QC was described as ‘adaptable in negotiations’ ‘adept at judging client meetings’ and ‘having an excellent grasp of papers’; while Richard Wright QC ‘remains a leading counsel of choice’.

To book any of our barristers, please contact our dedicated clerking team on 01132 459763.