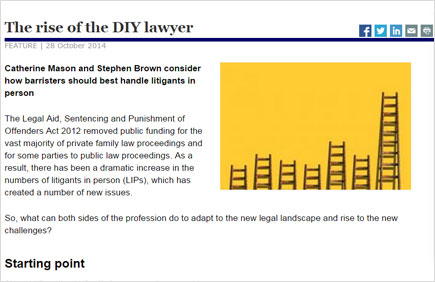 Court of Appeal comments on costs consequences of litigants in person

In November 2014, Catherine Mason and Stephen Brown were invited by Solicitors Journal to comment in an article on the increase in litigants in person in family cases, and to offer advice on how best to manage proceedings without a qualified advocate on the other side. (Read the article.)

Now, in Linder -v- Rawlins [2015] EWCA Civ 61, the Court of Appeal has dismissed the appeal of a litigant in person. Whilst the subject matter of the appeal will perhaps only interest practitioners dealing with financial remedies, the message that removal of funding of representation can lead to an increase in costs overall could not be clearer.

It may well be that, with proper advice, the unfortunate appellant in the case could have saved himself – and the other party – the delay and expense that would have inevitably have been caused by his unsuccessful appeal. It is further reason why practitioners finding themselves facing a litigant in person should have particular regard to how they manage the proceedings for the benefit of their own client.

Extracts from the judgment

32. The second observation is in no way a criticism of the husband who presented his case to us courteously and as comprehensively as he could. Nevertheless, the fact that he was not represented meant that he had approached it on a mistaken basis. The task that would normally have been fulfilled by the parties’ legal representatives, of finding relevant documents amongst the material presented, and researching the law and its application to the facts of the case, had to be done by the judges of the Court of Appeal instead. This is not a satisfactory state of affairs as the time taken to attend to this is considerable and cannot be spared in what is already a very busy court.

34. I agree with the judgment of Black LJ. I also wish, wholeheartedly, to endorse her observation at [32]. The procedural issue with which this appeal is concerned is technical and unusual. The husband could not be expected to have mastered this area of the law in order to be able to present his appeal in a way that assisted the court. The wife was neither present nor represented. Yet again, the court was without any legal assistance and had to spend time researching the law for itself then attempting to apply it to the relevant facts in order to arrive at the correct legal answer. To do the latter exercise meant that the court itself had to trawl through a large amount of documents in the file. All this involves an expensive use of judicial time, which is in short supply as it is. Money may have been saved from the legal aid funds, but an equal amount of expense, if not more, has been incurred in terms of the costs of judges’ and court time. The result is that there is, in fact, no economy at all. Worse, this way of dealing with cases runs the risk that a correct result will not be reached because the court does not have the legal assistance of counsel that it should have and the court has no other legal assistance available to it.