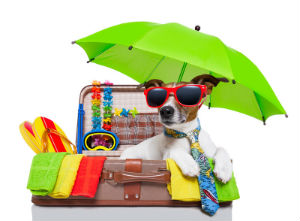 As I write this it is the last day of term for most schoolchildren in Yorkshire. The summer holidays are starting and this article is loosely and none too seriously based on that theme.

“[32]   Everyone agreed it would be ‘a good thing’ for the boys to come to London for such a meeting. I saw them together with Mr Bruton on Wednesday morning. My only regret about the visit was that I had not inquired, in advance, as to whether the boys did or did not like dogs. Had I known they do indeed, I would not have taken steps to banish my dog who usually plays such a valuable part in making everyone feel relaxed.”

Pawsing (sic) there, it is a pity that the first time recognition is given to this valuable role performed by dogs should be an occasion when the dog was banished. And why, one asks, was the dog banished when he / she “usually plays such a valuable part in making everyone feel relaxed (emphasis added)? But turning to the bigger picture, if dogs are now an integral part of the judicial toolbox, will the Judicial College be arranging dog-handling classes for judges?

“[33]   The meeting was a success. Both boys were quiet, respectful, polite and exceptionally well behaved. They are, as I said when I went back into court afterwards, a credit to both their parents and to everyone who has played a part in looking after them from earliest times. They listened intently to everything I said.”

Yes, yes – but what we really want to know is whether the dog is quiet, respectful, polite and exceptionally well behaved, whether he / she is a credit to its owner, and whether he / she listens intently to everything she says. Why aren’t these de-tails (sic) addressed in the judgment? Come to that, why don’t we know whether the dog is a he or a she? After all, we are told that the children were boys.

My research is in its infancy but a quick search of the Family Law Reports shows that dogs and cats are in a close run race, dogs being mentioned 82 times and cats 84 times. As far as I know cats are not yet part of the judicial toolbox, but perhaps this will follow the national roll-out of dogs-for-the-judiciary.

You’ll probably be planning to spend some time reading on the beach or by the swimming pool. Perhaps a John Grisham? Or maybe Ian McEwan’s The Children Act? But why not take the tip from the President of the Family Division in Re E (Brussels II Revised: Vienna Convention: reporting restrictions) [2014] EWHC 6 (Fam), [2014] 2 FLR 151:

“[38]   Articles 36 and 37 of the Vienna Convention on Consular Relations are probably not very familiar to most family lawyers.”

I confess that this statement struck a chord with me. So I shall be taking the Vienna Convention on Consular Relations 1963 on holiday with me. And because I feel it is likely only a matter of time before Munby P points out that they too are of direct application to my everyday practice, I will also take with me all the other Vienna Conventions I can find, viz the VC on Diplomatic Relations 1961, the VC on the Law of Treaties 1969, and the VC for the Protection of the Ozone Layer 1985. I am currently trying to find them as a boxed set.

You’ll also, surely, be sending some postcards back home, if only to the dog-minder (a retired judge perhaps – see above), ‘wishing you were here’, however truthfully or untruthfully. This set me thinking about all those hearings reported in the last year where I wish I had been there. As ever, there are plenty to choose from, but I doubt there was any more blood-chilling moment than the culmination of this exchange in Leicester City Council v Chhatbar [2014] EWHC 830 (Fam), [2014] 2 FLR 1365:

MR CHHATBAR: Can we appeal your decision?

MOSTYN J: I have given my decision. I have declared that Abdul Rahman was habitually resident in England and Wales on 17 October 2013

MOSTYN J: OK. So you need to ask me for permission to appeal.

MR CHHATBAR: Yes, that is what we are asking.

MOSTYN J: I can only give permission if I am satisfied that you have got a real prospect of success or there is some other good reason why an appeal should be heard. Is there anything else you want to say about that?

MOSTYN J: Thank you very much.

MR CHHATBAR: The court has got no jurisdiction. We are never coming back to England. Good luck. See how powerful you are, yes. You are powerful sitting there in your chair. It is a ******* fraud.

MOSTYN J: Thank you very much, Mr Chhatbar. It is a shame –

But fair play to Mostyn J. If he so much as batted an eyelid the report doesn’t show it. With admirable sang froid he simply continued:

MOSTYN J: All right. Mr Chhatbar applies for permission to appeal. Under the CPR Part 52 the permission can only be given if I am satisfied that there is a real prospect of success or there is some other compelling reason why the appeal should be heard. In as much as I can understand Mr Chhatbar, he says that my decision is wrong because I have no jurisdiction and because it is fraudulent.   I consider that I have applied the law scrupulously to the facts of this case. I am completely satisfied that there is no prospect of success of an appeal, let alone a real one, and that there is no other compelling reason why the appeal should be heard. I therefore refuse permission. Mr Chhatbar, of course, is entitled to renew his application for permission with the Court of Appeal. Thank you very much.

And presumably it was Mostyn J who arranged for the episode to be reported.

A very happy summer holiday to one and all.