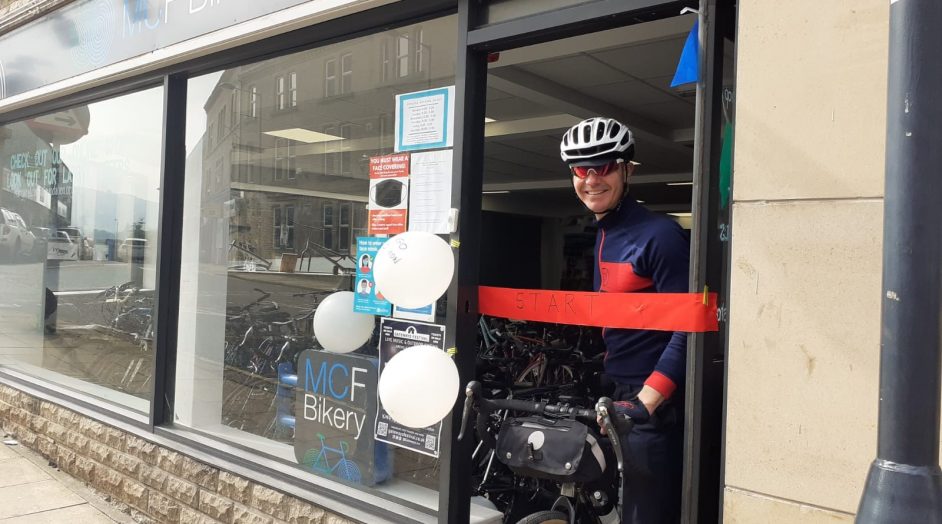 Simon Anderson is a trustee of the Margaret Carey Foundation – a charity that recycles old bikes and wheelchairs and distributes them to communities in need.

The full press release of his fundraising cycle challenge is below.

To sponsor Simon go to : https://www.margaretcareyfoundation.org.uk/fundraisers/the-wild-atlantic-way

On Saturday 29th May Leeds Barrister, Simon Anderson, set off an epic cycle ride taking in the entire coast of the Republic of Ireland and Northern Ireland to raise funds for the Margaret Carey Foundation (MCF).

Simon, who is also a trustee of MCF, will be completing the route, known as the Wild Atlantic Way over the course of 27 days starting on Saturday 29th May from the MCF Bikery in Shipley. The first day begins with an 84.4 mile cycle across to the north west to pick up the overnight ferry from Birkenhead to Belfast. Simon will be covering around 2000 miles, an average of 74 miles per day over the course of the challenge, finishing back at the Shipley Bikery on 24th June. Simon is covering all the expenses for the cycle challenge himself so every penny raised in sponsorship helps to support the ongoing work of the charity.

Simon first became aware of the charity through a colleague who had bought a refurbished bike from them. Having a legal background Simon took a keen interest in the work the charity does, delivering training workshops for individuals in the criminal justice system and other vulnerable groups in the community and joined the board of trustees in 2019.

Simon says: “As a trustee for MCF I know how challenging the last 14 months has been for the charity, both in terms of securing ongoing funding but also the very difficult operating conditions the prison and community workshops have faced. I enjoy cycle touring but this is definitely the most challenging route I have taken on so far. I’m sure there are going to be some tough days when my legs are tired or the weather isn’t favourable but I hope that by doing this I am able to raise some sponsorship for MCF.”

Simon who is a tenant at Park Square Chambers will be posting regular video updates of his progress which will be shared on the MCF website www.margaretcareyfoundation.org.uk where you can also view the itinerary for his cycle challenge.  To sponsor Simon, go to

Jon Warrick, Chief executive Officer for the Margaret Carey Foundation, says: “We’re really impressed by the challenge that Simon has chosen to take on to raise funds for MCF. We hope that others will be inspired by his efforts and support him through sponsorship pledges.”

Or call Helen, Business Development Manager on 07874 627801 or email: helen@margaretcareyfoundation.org.uk