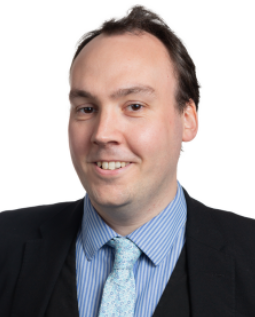 The Honourable Society of the Inner Temple

Chris specialises in personal injury claims on behalf of both Claimant and Defendant clients, predominantly in medium to high value Fast Track and Multi Track disputes and at all stages of proceedings. He has extensive experience in RTA and EL/PL litigation, regularly appearing in claims involving issues of causation, LVIs, credit hire and fraud.

Chris maintains a busy practice in clinical negligence, conducting litigation involving complex issues of vicarious liability in claims with serious injury and trauma at their centre.

He further acts in claims relating to industrial diseases such as Multi-Track NIHL whilst maintaining expertise in Highways Act claims and travel law. Chris has experience in bringing and defending claims within foreign jurisdictions and, having studied French law and European law in continental universities and being a fluent French speaker, is able to directly assist with such claims.

Chris has been involved in credit hire litigation since the start of his practice in 2012 and has appeared on behalf of both Claimants and Defendants at all levels, from straightforward small claim hearings to complex multi-track hearings. Chris has particular experience in claims involving fleet vehicles.
Whilst much of Chris’ work will inevitably be based in the North and North East, he travels all over the country to deal with fast and multi-track credit hire matters. Recent cases have taken place in Chatham, Dudley, Clerkenwell, Birmingham and elsewhere. With the above experience Chris is very familiar with the wealth of credit hire decisions, from Dimond to McBride, and all of the issues they entail – enforceability, impecuniosity, intervention letters, consumer credit regulations and more.

Chris drafts pleadings and represents client in Court across the spectrum of personal injury claims. He maintains an expertise in the following areas:

Chris regularly delivers CPD approved training and seminars in large and smaller groups, having spoken on the following topics: