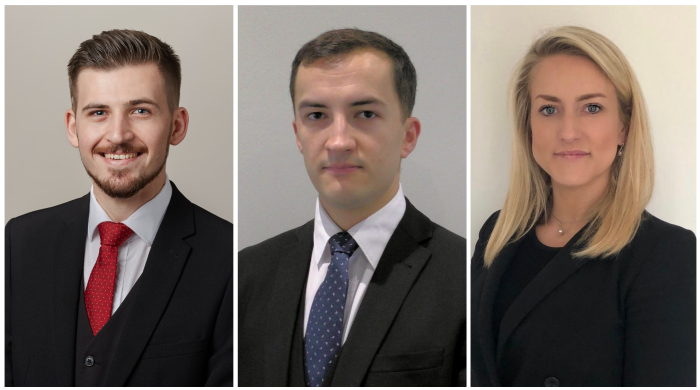 All three have undertaken a mixed common law pupillage at PSQB – and all three have had glowing feedback from instructing solicitors and their tenancy applications were unanimously approved.

James Holding has been under the pupil supervision of Matthew Harding. James has had a very busy second six doing crime, civil and regulatory cases appearing in the Crown, County, Tribunal and Magistrates Court. (link to profile) .He was recently instructed in a section 18 wounding trial after impressing a local solicitor with his representation of a client with mental health issues at Leeds Crown Court,

Joseph Hudson’s pupil supervisor has been Robert Stevenson. Again Joe has done a variety of cases and secured a Not guilty verdict in his first Crown Court trial – https://www.parksquarebarristers.co.uk/news/joseph-hudson-secures-acquittal-first-jury-trial/

Chelsea Brooke-Ward originally secured pupillage with a Solicitors firm in Newcastle before joining PSQB on a secondment in October last year. Chelsea has spent most of her pupillage with Nadim Bashir.

In her second six, Chelsea has conducted criminal, regulatory and civil cases – including a number in the employment tribunal.

Chelsea will be delivering an Employment Seminar on 3 October on “practicalities of providing disability and discrimination in employment law”.

For further information about our three newest members of Chambers – please contact one of their Clerks….